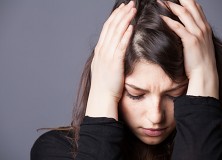 With the hectic lives that many of us lead, it’s not surprising that the signs of iron deficiency often get brushed off or even go entirely unnoticed, often until the iron stores have been depleted to the point of a person becoming anemic. The more deficient in iron that our bodies become, the more pronounced the symptoms will be. A person can have an iron deficiency without being anemic, though left untreated the iron stores will drop low enough to cause anemia.

Though iron deficiency in its early stage doesn’t always cause symptoms, being aware of the triad of iron deficiency symptoms can alert you to a potential problem so that you can seek treatment sooner rather than later and have a better chance of replenishing your iron stores before they drop too low.

The triad of symptoms related of iron deficiency: As mentioned, our busy schedules and daily stressors can often make us experience these same symptoms. Who hasn’t felt irritable and tired after a busy or stressful week at work or school? There are also medical conditions other than iron deficiency and anemia that can be responsible for similar symptoms.

If you find yourself feeling fatigued and sluggish on a regular basis regardless of how much sleep you get and experience issues with concentration and irritability that don’t seem to be getting any better, then a trip to the doctor is in order to check your iron. This can be done through simple blood tests that check your levels of:

Your doctor will recommend eating foods rich in iron or taking an oral iron supplement depending on your symptoms and test results.

4 thoughts on “3 Symptoms that Point to Iron Deficiency”